What does it mean for a young person to come to Norway as a volunteer? 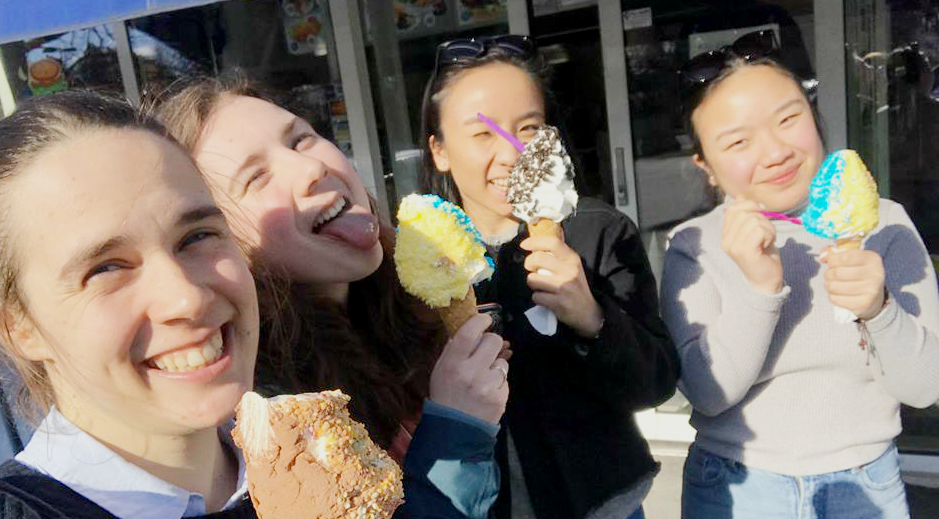 We will try to get an answer by interviewing Ricarda Wittchow. She arrived at Katarinahjemmet in august 2016 to volunteer for ten months. As a volunteer she helped out at St. Johannes catholic parish and at Katarinahjemmet. She also contributed at camps held by the Norwegian Catholic Youth Organisation.

The interview is done by sister Ane-Elisabet Røer, which is the person referred to when Ricarda says ‘you’.

How did you come across the volunteer programme at Katarinahjemmet? 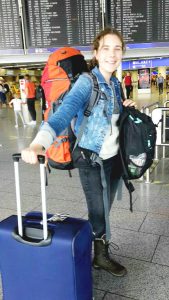 After I finished high school, I wanted to take a gap year. I was very interested in Norway, and looked for volunteer programmes in Oslo. I first looked online, and found the organisation Camphill. But Camphill didn’t have any offers for Germans to go to Oslo, and I had a feeling it was Oslo I was meant to end up in. Then my mum said I should try look for something within the church, and I instantly thought: “No! There are only 3% catholics in Norway, the Catholic Church can’t possibly have any volunteer programmes there”.

Despite these thoughts, I searched the web and found Bonifatiuswerk´s programme and discovered that they not only sent volunteers to Norway, but to Oslo! That’s how I found the organisation that lead me to here. Thanks mum!

What expectations did you have before engaging in the programme?

I already knew some Norwegian, so the reason why I applied was to improve my knowledge of the language and to learn more about the country. I didn’t just want to know the culture and language from an outside point of view, but from an inside perspective. I wanted to experience an authentic Norwegian lifestyle!

I think I also wrote to Bonifatiuswerk that I not only wanted to learn the language, but that I also wanted to get to know people and make many new friends in Norway. Until then I only knew of one Norwegian person, the singer Maria Mena, whom I used to listen to as a child.

I was certain I wanted to come to Norway, although Bonifatiuswerk also sends young people to other northern european countries. That’s why I only applied to go to Norway. When I applied I got in touch with Julia Jesse, whos responsible for the whole programme. That got my hopes up. Apart from that, I didn’t have a lot of expectations. But I looked forward to getting to know a new part of the world, and to be away from home on my own. I had just turned 18 and finished school.

Shortly before I arrived in Norway, I got in touch with the sisters at Katarinahjemmet through Skype. That’s when I was told more about what to expect work wise. I liked the thought of being able to do something for the convent, that there was need for me in their mission. I was also curious about the relationship between the student home and the convent. And of course, I also hoped for some free time.

Before I arrived, I had planned to see a lot of the country. That was important to me. I decided I would do some travelling towards the end of the programme. During my time in Norway, the need for travel became less urgent, as I had many opportunities to travel during my stay. I’ve visited cities such as Bergen, Tromsø, Halden og Sandefjord.

The volunteers visit Bergen during the fall of 2018. Ricarda is at the far left.Towards the end of my time in Norway I realized that you don’t need to travel as much if you’re enjoying the place you’re at. So as you can imagine, I saw a lot of Oslo.

What have been your tasks and mission while you have been in Norway?

I’ve been both at Katarinahjemmet and at St. Johannes the Apostle and Evangelist parish. My mission in the parish was to provide support where it was needed. I’ve been “backstage” and helped the Parish Secretary organise different events and everyday tasks with the other parish workers. I’ve helped make the parish life more interesting and colorful. I’ve also been an assistant in the children’s choir, and I participated on a weekend camp for the catechism group.

At Katarinahjemmet I helped out in the kitchen and at the student home. Today I see cooking and serving food and as an important task. I see it as a way of following Jesus. By cooking and serving, I’m doing what He did. It means a lot to me to be able to spread love through food, and I never imagined cooking would become this important to me. My view on it has changed since I arrived in Norway 10 months ago, It has a whole new meaning now!

Another thing which has meant a lot to me while being at Katarinahjemmet, is sitting and talking to the other students and volunteers. In those situations I haven’t only had the chance to give, but also to receive.

Cooking and being present in the student home has also given me a sense of achievement. When I came to Oslo, I thought I didn’t know how to bake, but Aimee, who works in the kitchen, encouraged me. Eventually I realized that in fact, I could bake!

In which way has your time as a volunteer influenced your faith?

I didn’t expect my faith to change, but the opposite happened. The church life I experienced here, was different than the one I was used to.  I have learned a lot! Especially when it comes to the importance of the Church as a community. Being in a big community, was different from what I had experienced at home, where there are few young people. Seeing how the Norwegian Catholic Youth Organisation organises camps for so many kids and youths was new to me. It was also encouraging to see how the students at the Katarinahjemmet student home live their faith. It made me understand that faith isn’t something you live alone, but something were meant to share with others.

I’ve also discovered new ways of talking to God, like praying Vespers. I wasn’t aware of the existence of the liturgy of the hours. I used to be uninterested in that side of the Church’s tradition.

The Rosary and the prayer ‘Hail Mary’ were also new to me. They weren’t prayers I usually prayed in Germany, but here I learned these prayers in the parish I served. Today I know these prayers better in Norwegian than in German. I’m truly grateful for everything I’ve learned. Oh, and one more thing; when looking at you sisters at Katarinahjemmet… I knew you’d be different people, but discovering how different you are from each other was beautiful. Through you I’ve seen that it’s  possible to be a community, to live in faith and to have one mission, while still giving each other the chance of doing it in their own unique way through their own strengths and gifts.

What were some challenges you had to face?

It wasn’t just baking which was challenging. I didn’t have any experience within church work. And especially no experience when it came to teen camps! Before the  first camp weekend, I thought: “Oh no! it’s probably going to be exhausting!”. I also feared answering all of the questions the youths would have, both because of my limited language skills and because I thought I didn’t know enough about God and our faith.

The approachableness people showed me helped, they were very welcoming towards new people. It gave me a sense of security, and I overcame my fear of taking up social space. It was amazing!

What has been the best thing about your time as a volunteer?

The people I had the chance to meet! The joy! The friendships with the students and the other volunteers. It was truly special! Im sad we’ll not be sharing our day to day life any longer, but i’m sure we’ll stay in touch. It’s been amazing to be with so many different people who all share the same faith. Through conversations I’ve been exposed to new ideas and viewpoints that I can learn from.

It’s been meaningful to experience that the help I offer can actually make a difference, whether it is for the children in the children’s choir or for friends I had conversations with. It’s beautiful to pray together! It creates a sense of community. I especially treasure the memory of us volunteers sitting in the chapel together and praying a rosary for sister Anne Bente on her 60th birthday. Another memory I’m fond of is when we went to Bergen, and I prayed the rosary for the first time. The norwegian nature is also something really appreciated. Even though Katarinahjemmet is in the city, nature is only a step away. I loved that!

You have passed the Bergenstest while you have been here. What did that mean to you?

The Bergenstest (Norwegian language test) was something I had decided I wanted to do. I thought of the possibility of staying in Norway and studying here. Although I changed my mind about it, I learned a lot from studying for the test. I learned to write essays and to think in Norwegian. I’m actually not looking forward to having to speak German again. The Bergestest was also important to me because I has a feeling of mastering something hard. I had a set goal, and I reached it! The sister’s support was crucial. “Go girl, you can do it!”, they said, and I did. I have a certificate to prove it!

You’re going home now, and in September there will be two new volunteers here. Do you have and advice for them?

Don’t be afraid to try new things! Try to talk! It’s easier to get in touch with new people if you talk. Try it, even if it is a new language! Find something to do during your spare time. There was more spare time than I thought. I spent a lot of my time swimming and exploring the city on my own. I’m glad I challenged myself to do that. Now I enjoy doing things on my own, weather its exploring the city or going to a concert. It’s also important to get to know the area you live in, well. Be nice to others! Everyone here at Katarinahjemmet is in need of kindness, so be kind! And most importantly: learn to love kitchen work! I’ve learnt a lot by helping out in the kitchen, but if I hadn’t had such an open mind about it, I don’t think I would have learned anything.

What is the most important thing you will take home from your time as a volunteer?

What I’ll take home and continue to work for, is the importance of community within the Church. I think it’s something i*ll miss when I come home, so I’m going to look for a parish where I can continue volunteering and engaging in different types of work.

Another thing I’ve learnt that i’d like to take home, is the importance of understanding people. Not only have I come to understand that people in the world are very different from each other, but the fact that they are, is a good thing. I’ve earnt not to judge by my first impression, but instead to spend time getting to know them as a whole, and not just one side of them.