This year the Dominican friars celebrate their 100 years anniversary precense in Oslo! 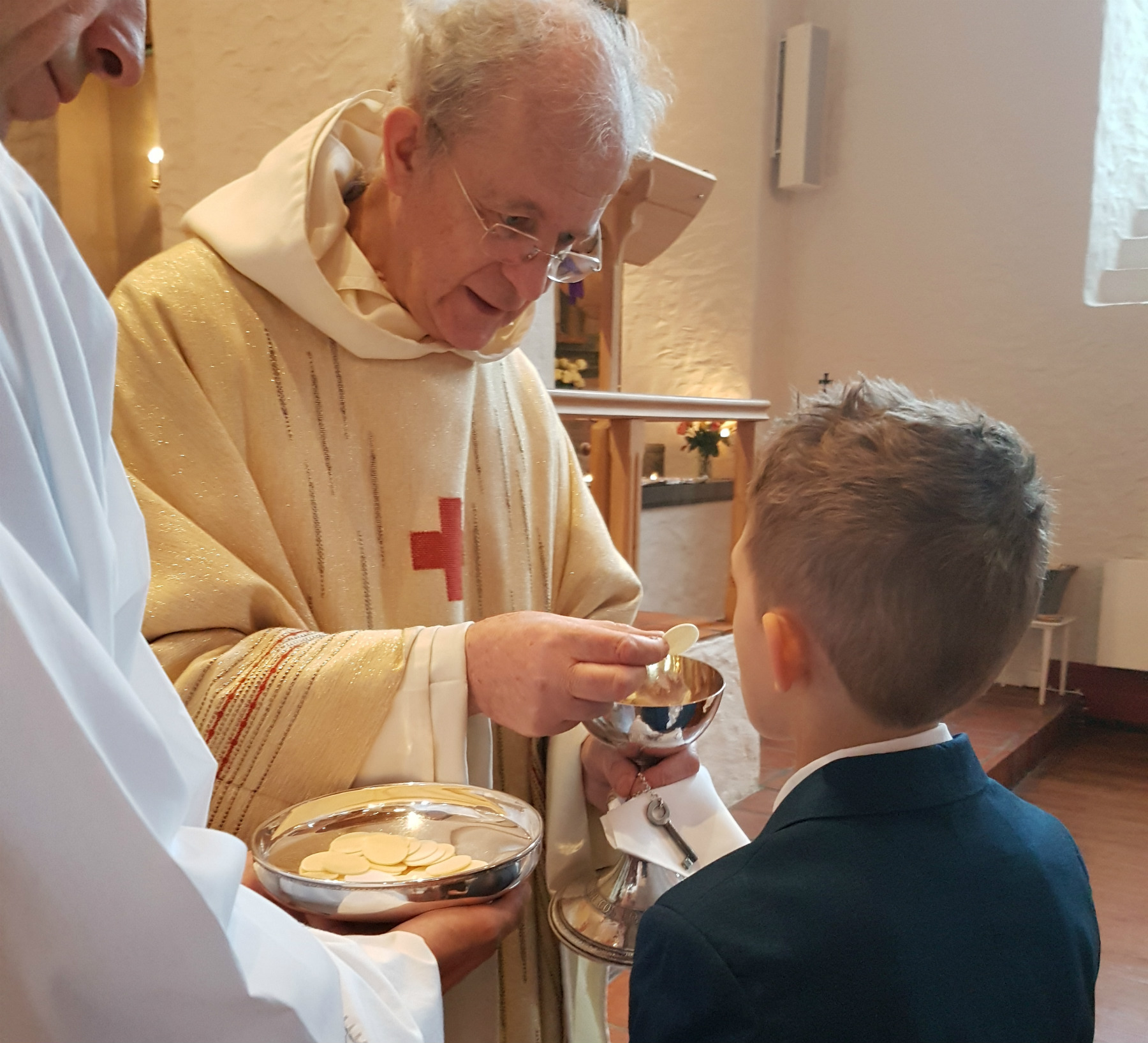 It has been 100 years since the first brothers arrived in Oslo and moved into Neuberggaten 15, which was only a small wooden house at that time. Since then, they build the St. Dominikus kirke and a new monastery building.

What many people don’t know is that the brothers who came in 1921 were indeed the first to come since the reformation in 1537. But before then, there have already been Dominicans in Norway, who stayed here for a long time.

To take a closer look at the Dominican Order / Order of Preachers it makes sense to start with the person the order was named after Saint Dominic.

Saint Dominic (ca. 1170 – 1221) was a Spanish catholic priest. He was educated in Palencia where he studied arts and theology. In 1194 he joined the Canons Regular (a religious community attached to the cathedral) and became subprior in 1201.

St. Dominic started a mission together with Diego de Acebo, the Bishop of Osma, in the south of France, where they converted heretics. Because he recognized the need of an institution of the Catholic Church in the area, he established a convent for women at Prouille in 1206. This was the first Dominican House.

In 1215, St. Dominic was granted permission to form his own religious order to convert false believers through the spoken word and exemplary living. Finally, Pope Honorius III. officially approved the order in 1216 and the Order of Preachers was founded. Only one year later, there were already 60 Dominican convents (for men).

The Dominican Order was one of the most popular orders in the middle ages. Its vocation is (then and today) to proclaim Jesus Christ for the salvation of souls.

Arrival of the Dominican Order in Norway

The way that the Dominican Order arrived in Norway in the 13th century was more of a coincidence than a plan. On March 29th 1220 the Danish priest Salomon became a Dominican in Italy. He was one of the first Scandinavians to become a Dominican.

In 1221, the second general chapter in Bologna decided to have a missionary campaign in the Nordic countries, so Salomon was sent back to Denmark to build a convent there.

But, because of a raging storm on the sea, Salomon ended up in Nidaros (Trondheim) instead. Because of that, three convents were built in Norway before the year 1350: in Trondheim, Oslo and Bergen.

The St. Olav convent in Oslo was built in 1239. You can visit the ruins in the memorial park in Gamle Oslo. It is the best preserved town monastery in Norway.

Before the reformation, there were only friars in Norway, but not any Dominican nuns og Dominican apostolic sisters. The brothers were called “sortebrødre“ because of their black clothes.

When the Black Death came to Norway in 1349, many brothers died and the situation only got worse for the Dominicans. The Reformation in 1537 put an end to all domestic and catholic activities in Norway.

A new start for the Dominicans

In 1843, the Norwegian parliament passed a religious tolerance act which provided limited religious freedom. For the first time in more than 300 years, non-Lutheran services were allowed in Norway again. Finally, the constitutional ban on religious orders was lifted in 1897.

After the First World War, the French Province decided to send Dominican brothers to Oslo in order to build a new monastery there. Two brothers moved into Neuberggaten 15 just one year afterwards and more brothers followed. The St. Dominikus kirke was finished in 1927.

Even though the catholic population was very small at that time, people seemed to be really interested in the Catholic Church and many came to the preaching of the priests. The first preaching were mostly informative “lessons” about the Catholic Church that the people in Norway knew so little about because of the lack of religious variety at the time. Over the years, the friars started to work in the parishes and became more and more active.

The first Norwegian to enter the Dominican Order was pater Finn D. Thorn who entered the noviciate in 1932. When the Second World War began, the house closed down and the French friars fled to Stockholm, but p. Thorn stayed on in Oslo.

When the war was over, the convent experienced a brilliant period, where five Norwegians entered the order and the catholic community in Oslo grew a lot. In 1970, the construction of the new conventual building, as we know it today, was finished.

Today, there are six friars at the convent, four Norwegians, one from France and one from Ireland. The friars see their mission in the proclamation of the Gospel of Christ. Besides working in the house, the friars also work in the parishes. They have for example been doing youth work or organizing retreats. The brothers see it as their vocation to encourage people to believe and to spread the catholic faith.

Being in a Dominican Order is a way of living with the believe that in order to seek the truth one needs honesty and humility. The brothers are not cut off from society but are very familiar with the religious, cultural and social spheres of society. This is for example shown by priests who were able to connect their jobs to the religious life. Pater Hallvard Rieber-Mohn was a journalist who focused amongst other topics on new German history and wrote about how Germany changed through the influence of the National Socialists in the 1930s and 1940s. He wrote for the press and his writings are displayed in the impressive library of the convent.

Since the very beginning, the traditional direct preaching from the pulpit as well as the celebration of the church’s liturgy have been most important to the Dominicans. As the religious search and longing is still increasing nowadays, the Dominican activities in Norway are constantly growing in importance.

The founder of the Lunden Kloster was Marie Knudtzon (born 1879). She was the daughter of a wealthy businessman and entered the Catholic Church in 1903. When she attended the canonization of Thérèse of Lisieux in Rome in 1925, she got an impulse that she had to build a monastery for nuns in Norway in order to complete the Dominican Family there. Marie Knudzon herself was already too old to become a nun but she decided to find and sponsor a place near Oslo for the sisters. Finally, she found the “Lunden Farm”, a lovely place outside of the city. In 1951, three sisters were sent over from Lourdes, France. That is now 70 years ago! Eight years later the Bishop of Lourdes announces the Lunden Kloster with 12 nuns an independent convent.

Today, there are eight Nuns at the convent and the community is very multicultural because of their different backgrounds: Norway, Germany, France, Poland, and Italy.

It is important to mention that the sisters at Lunden Kloster realize their mission in a different way than the friars. They live within the monastic enclosure and seek the “salvation of the world through prayer and worship, in penance and renunciation.” The nuns’ Christian life is a life of faith. They believe that through their life and prayers God will do something good, without them relying on seeing the results.

The daily life in the monastery is based on three pillars: prayer, work and lectio devina, which is a so-called spiritual reading of the Bible or other church texts. The Nuns’ way of life makes the Lunden Kloster an oasis of peace and quiet, where people can regain their inner balance and seek God.

When the Dominican friars came to Oslo in 1921, soon the wish arose to also have Dominican apostolic sisters in Norway to help the friars there. These requests got to France and the sisters at Chatillon-sous-Bagneux decided to send the first sisters over.

The Dominican friars looked for a place to build a convent for the sisters and found a property in Majorstuen, close to the Dominican Convent of friars. On Pentecost 1928, the first two sisters came to Oslo and many followed. They came with great goals: besides the fact that they wanted to help the friars with their mission in Norway to create a Norwegian-catholic milieu, they also wanted to build a home for students and young women.

With the entering of Norwegian sisters, the place became more and more Norwegian and the sisters were busy with learning the language and later for example with translating the liturgy into Norwegian. Over the years, the place became a meeting place for catholic and non-catholic people, for example with the chapel. People from inside and outside the house were and of course are still able to come to the chapel to pray or to attend the mass.

With the construction of new buildings on the property, there was more space for students and the sisters were very focused on supervising the new student home and working in the house. In the seventies, the sisters also started to work outside for the church and later as well in jobs not relating to the church.

Today, Sankta Katarinahjemmet still is a calm meeting place for catholics and non-catholics in the busy streets of Majorstuen and because there are so many different people living together, a great community of sisters, students, volunteers and guests has evolved.

Lay Dominicans are people living a Christian life with a Dominican spirituality in the secular world.

While St. Dominic founded the Order of Preachers, many forms of penance arose in Italian and French cities. Many people who repented later tried to align their lives with the gospel and to imitate the early life of Christ. Because they associated themselves with the Dominican Order, they also started to wear black clothes and considered it their mission to support the Dominicans through social work and donations. By the time they were known as Brothers and Sisters of penance of St. Dominic but it took about 200 years before pope Innocent IV confirmed the Third Order in 1407.

Today, there are Lay Dominicans all around the world. In Norway, the members live their lives separately but are bonded together by the love for the Dominican Order, its founder, traditions, spirituality and members and also by their passion for the Word of God. They commit themselves to a community of like-minded brothers and sisters. Prayer, study and preaching are the cornerstones of the Dominicans and these are also of highest importance to the Third Order. Lay Dominicans try their best to integrate Dominican ideals in their daily lives.

The Catholic Church in Norway is very different in comparison to other European countries. Because of the constitutional ban on all non-Lutheran religions from 1537 to 1843 it took longer for a religious variety to develop afterwards. Today, many countries face a decrease of the catholic population. For example in Germany, parishes have to close and churches are no longer visited by so many people.

In Norway you can see the opposite. New parishes open and new churches are built. The catholic population has grown a lot in the past ten years, but there are still so few Norwegians that are Catholic. The majority of Catholics in Norway are immigrants, for example from Vietnam, Poland or the Philippines. That is why the church is also such a multicultural place today. We will see the development of that in the next years.

But for now, we want to celebrate the 100 years anniversary of the Dominican friary in Oslo and hope that there will be many more people in the years to come that are interested in the Catholic Church and the Dominicans in Norway!

The Dominicans in Norway: